Among all the Impressionist painters, the shy and solitary Alfred Sisley, a man of English origins, was one who was most aware of the luministic tones of the landscape. He conducted almost scientific studies on sunlight and its sparkling effects on water following in the romantic traditions of the English landscape artists, Constable and Turner. His parents, William and Felicia, née Sell, were both English and had moved to Paris a few years before Alfred’s birth on 30 October 1839. In order that he continue his father’s business, (he was a merchant who dealt in luxurious haberdashery) young Alfred was sent to London in 1857 when he was 18 to attend business courses. Staying in London for four years, he began visiting museums and gradually became more interested in art than in business. Upon his return to Paris in 1862 he obtained his parents’ permission to devote himself to painting and entered the Ecole des Beaux-Arts directed by Gleyre of Switzerland. It was there that he met Monet, Renoir and Bazille and was encouraged to paint outdoors, from life. During the coming years Sisley and his three friends went to paint in the Barbizon woods and at Fontainebleau, where he did his first landscapes, still inspired by the barbizonniers, Rousseau and Daubigny. Two of his landscapes, of Marlotte were accepted at the 1866 Salon and by August he was on the coast of Normandy with Renoir and Le Coeur. Between 1867 and 1869 Sisley’s companion Eugénie Lescouezec (whom he married in 1897, a year before his death) bore him two children. In 1870 although two more of his paintings were accepted by the Salon his already precarious financial situation worsened even more, partly because of the outbreak of the Franco-Prussian War. In 1872 the entire Sisley family moved to Louveciennes, west of Paris and he began painting this village on the banks of the Seine in the Impressionist manner, fresh, luminous and often covered with snow. Later, during the same decade, no matter where he stayed (Marly-le-Moi, Sèvres) he would always find excellent subjects for his painting. After having entrusted many paintings to the art merchant Durand-Ruel who showed them in London in 1972 Sisley joined the Societé Anonyme des Artistes-Peintres, Sulptures, Graveurs and was one of the men behind the first Impressionist exhibition that was held at the Paris studio of the photographer Nadar in 1874. In April 1876 he participated in the second Impressionist exhibition with a painting from the group of scenes of the flood at Port-Marly (The Flood at Port-Marly, 1876, Paris, Musée d’Orsay). He participated twice more in the Impressionist exhibitions, that is in 1877 (with seventeen paintings) and in 1882 (with twenty-seven). Like the paintings of the other members of the Impressionist movement, Sisley’s work is distinguished by his absolute loyalty to the real landscape genre (without ever yielding to the portrayal of a figure), the particular value he attributed to observing the sky as the source of light and his understanding of the meaning of the places he portrayed. In the ‘eighties and ‘nineties, concomitantly with the so-called crisis of Impressionism, Sisley continued painting en plein air strengthening the chromatic tones and the thickness of his brushstrokes, as he took the opportunity to paint the scene under different weather conditions, until he created series of paintings of the same subject (like Monet and Pissarro). His preferred sites were the banks of the Loing bordered with poplars, the old houses of Saint-Mammès and mainly the church at Moret (between 1893 and 1894) that he painted with shading that made it possible to conserve the shapes without Monet’s formal abstractions. Alfred Sisley died of throat cancer in January 1899 at his beloved Moret-sur-Loing. However, his paintings only achieved commercial success a year after his death.

He is the painter of the big blue rivers that curve away to the horizon, of flowering orchards, of splendid hills with red-roofed villages scattered all around. He is also, and above all, the painter of French skies, that he portrays with admirable liveliness and skill. 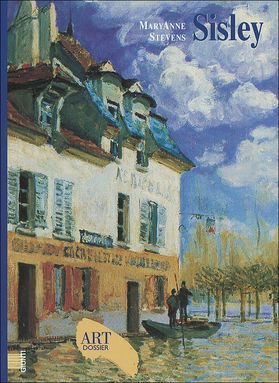