Born in Ferrara in 1842, Giovanni Boldini was introduced to painting by his father, Antonio, a competent purist who was drawn to the fifteenth century masters. In fact, the early years of Giovanni’s training were dedicated to reproducing the Renaissance masterpieces in Ferrara’s museums and studying in the atelier of the Domenichini brothers, Domenico and Girolamo who were painters and decorators. In 1858 he painted a Self-Portrait as a Youth, and portraits of ladies and important people from Ferrara, thus starting with the genre that he would never abandon: the society portrait. In 1862, thanks to a small inheritance from an uncle, Boldini moved to Florence to attend the Accademia di Belle Arti and became an inseparable friend of Michele Gordigiani and Cristiano Banti who, in turn, introduced him to the group of artists that met at the Caffè Michelangelo, the Macchiaioli’s haunt. Here, Boldini painted portraits and landscapes and became acquainted with many members of the English community in Florence, including the Falconer family. In 1865 he was a guest of Diego Martelli at Castiglioncello and the following year took a trip to Naples with his friend Cristiano Banti. During this period he painted portraits of Cristiano and his children, Alaide Banti and Leonetto Banti (1866). Boldini made his first trip to Paris for the Universal Exposition in 1867; there he met Degas, Manet and Sisley. The year after his return to Tuscany he began frescoing the dining room (with country scenes) in “La Falconiera”, the Falconer family villa in the Pistoia countryside. He interrupted his work on this project several times and only finished it in 1870. After a brief stay in London, in 1870, where he became acquainted with eighteenth century English portraiture, he moved to Paris in 1871. At first he painted neo-eighteenth century style genre pictures on commissions from Goupil, one of the most fashionable dealers for whom De Nittis, Meissonier, Palizzi and Fortuny also worked. Later, around 1874 Boldini turned to Parisian street scenes, but mainly he painted portraits and became one of favorite artists of the local high society. During that period, which marked the consecration of the Impressionist movement (the exhibition was held at Nadar’s photography studio in 1874) Boldini offered a view of a different, darker and more dynamic world in his paintings. His French reference was Degas and his “interior” scenes rather than the typical “en plein air.” Thus, in the ‘Seventies, Boldini totally abandoned street scenes and dived into in the crowded atmosphere of theaters, parties and mainly the cafés, the new fulcrum of contemporary life. The changeover also affected his style, he gradually darkened his palette with grays, brown and black and made his brushstrokes faster and shorter. This was also the result of suggestions acquired during an 1876 voyage to Holland and Germany where he was particularly impressed by the works of Frans Hals and his contemporary Adolph Menzel. In 1882 he painted the portrait of the musician Emaneule Muzio, who introduced him to Giuseppe Verdi who sat for him in 1885 when he made a brief trip back to Italy. He completed Verdi’s portrait in 1886 and the following year the composer invited him to attend the première of Otello at La Scala. During the eighteen-nineties, and one of his extended sojourns in Italy, he worked on large portraits (of most original elegance) and the society evenings at opening nights of the opera. In 1900 Boldini was in Palermo working on the portrait of Donna Franca Florio, that would be shown at the Venice Biennale in 1903. He participated in the Universal Exposition in Paris with his portraits of Whistler, the Infanta Eulalia of Spain and other paintings. He constantly – and successfully – participated in various Salons and international exhibits until he was struck by bronchial pneumonia and died in Paris on 11 January 1931. He was buried at the Certosa in Ferrara.

There is a fleeting moment in life to grasp and he expresses it with a stroke, in a flourish, in a bow; he suggests it with a rough or leaden touch on the lips, with a red circle around two feverish eyes; he makes a rebellious lock of hair tremble on the nape of a woman’s neck. And he does it well. 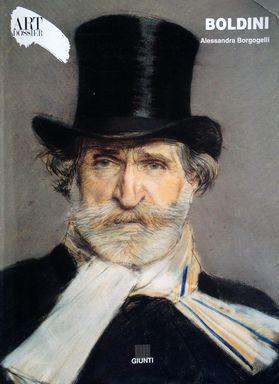