Agnolo di Cosimo di Mariano, known as Bronzino was born on 17 November 1503 at Monticelli just outside Florence. His family belonged to the city’s petit bourgeoisie. After a brief apprenticeship in the atelier of Raffaellino del Garbo, as we learn from Vasari and Borghini, he became friends with and the only pupil of the eccentric mannerist painter, Jacopo Carucci who was known as Pontormo. Throughout the ‘Twenties Bronzino’s style reflected that of his teacher with whom he worked on decorating the Capponi family chapel in the church of Santa Felicita in Florence. He painted two or more tondos of the Evangelists. The stylistic homogeneity of the four beautiful tondos makes it difficult to distinguish the hand of the master from that of his pupil who, in the early ‘Thirties, began to acquire an autonomy of style. The first of the few trips he made during his calm life as a bachelor took place in 1530 after Florence was besieged by the imperial troops of Charles VI. He went to Urbino to the Della Rovere court where he painted portraits (such as Guidobaldo della Rovere, 1532, Florence, Palatine Gallery) and (with other artists) decorated the Imperial Villa in Pesaro. He returned to Florence, and in 1537 was already a member of the Guild of San Luca. Bronzino began to distinguish himself among the city’s major families as a capable and original portraitist who was extremely talented in rendering rank and intellect and well as human and character features (for example Portrait of a Lady with a Puppy, i1532-1533; Lorenzo Lenzi, 1533-35 and Ugolino Martelli, prior to 1537). In 1540 Bronzino became the official portraitist of the Medici family. His talent was noticed by the young Cosimo I during the celebrations for his wedding to Eleonora de Toledo on 29 June 1539 because, along with other artists, the painter had participated in the creation of the decorations that were customary for such an event. The Grand Duke Cosimo decided to appoint Bronzino to decorate the Chapel of the Duchess Eleonora – including the altarpiece – in Palazzo Vecchio. He completed the project within five years (1540-1545). From 1545 to 1553 in addition to painting portraits of all the members of the grand duke’s family in a cold and impeccable style (Eleonora de Toledo with Her Son Giovanni, Bia de’ Medici, Francesco de’ Medici, Maria de’ Medici) he was also put in charge of the Medici tapestry works and prepared the cartoons with the Scenes from the Life of Joseph. During the ‘Sixties Bronzino distinguished himself in the Florentine cultural milieu by composing poetry, saltarelli and sonnets. In 1563 together with Vasari, Ammannati and Borghini, he was a sponsor of the Accademia delle Arti del Disgeno and became consul of the academy in the summer of 1572. In the meantime, his atelier had become one of the most prestigious in Florence as he had understood the task of “normalizing” the eccentric, intellectualistic character of Mannerist art under the paternalistic protection of the reigning family, prior to the advent of the favored, Giorgio Vasari. When Bronzino died, on 23 August 1572 in the home of his favorite pupil, Alessandro Allori, Vasari definitely took over the management of the city’s and the government’s artistic policies. All the artists in Florence attended Bronzino’s funeral to pay tribute to one of the greatest protagonists of Italian Mannerism.

In all of Bronzino’s portraits, even the most “official” ones, the subject is intellectually reconstructed rather than observed in his physiognomical and psychological reality; but there is an increasing quest for an even, almost geometric form that is accompanied by a clear, cold color that even reaches high notes even though they are always attuned to the proportional averages of gray. But, it is not, as in Raphael’s Florentine portraits (that Bronzino never forgot) a transition from the specific to the universal; after the new image of nature created by Leonardo, the geometric regularity of the human form seems like a rare case, an exception, a precious anomaly. The formal purity that Bronzino gives his subjects is a supreme praise: as if to say that the person is the precious result of a difficult choice. Raphaelesque “beauty” shifting from the natural to the social order becomes the “best”, the way-of-being of an elegant, intellectually superior society. Raphael’s subjects seem to come from the Cortegiano by Baldesar Castiglione, Bronzino’s from the Galateo by Monsignor Della Casa. 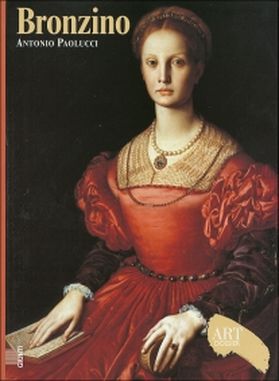