Son of the theatrical scene painter, Bernardo Canal, he began working with his father with whom he journeyed to Rome in 1719-1720. There, he had the occasion to become acquainted with the works of vedute painters, Giovanni Paolo Pannin and Gaspar Van Wittel, and, through their influence he abandoned theatrical scenery for painting. By 1720 he was back in Venice where he joined the painters’ guild. The four large views that he painted for the Prince of Liechtenstein date from around 1723. In these paintings Canaletto revealed a well-defined artistic personality: he accentuated the contrasts between light and shadow with dramatic effects and favored the more “picturesque” views of Venice. Soon his fame as a vedutista crossed the lagoon: in 1725 a wealthy merchant from Lucca, Stefano Conti ordered two paintings; the Irish impresario Owen McSwiney commissioned him, along with other artists to paint a series of allegorical representations of the tombs of famous English historical figures. In 1726 he sold some vedute to Joseph Smith the future British consul in Venice who would become his main client and dealer. The first edition of Prospectus Magni Canalis Venetiarum was published in 1735. It was a collection of fourteen engravings from Canaletto’s vedute commissioned by Smith. A second, expanded edition was published in 1742. By this time Canaletto’s success was at its peak: he work intensely to satisfy the great demand for his work that came mainly from the English market. He raised the veduta genre to levels of extreme rigor and clarity by eliminating the eighteenth century taste for the anecdotal detail in favor of an objective rendering of reality in keeping with the Enlightenment philosophy, and even developed the use of the camera ottica. In 1746 he moved to England where he lived for about a decade and painted many views of London, the English countryside and several capricci. Upon his return to Venice his output diminished. He was elected to the Venetian Academy 1765 after the presentation of his painting Capriccio, a courtyard and colonnade of an imaginary palace (Venice. Gallery of the Accademia). He dies in 1768.

...His specialty is painting views of Venice. In this genre he surpasses everything that existed before. His manner is luminous, joyful, lively, transparent and wonderfully luminous. The English have spoiled this artist and offer to pay three times the price he asks, so that it is no longer possible to buy anything from him. 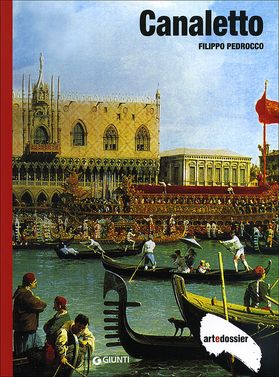