Born at Volpedo near Alessandria in 1868, Giuseppe Pellizza came from a family of small landowners and grape growers. After completing technical studies he moved to Milan in 1883 and enrolled in the Accademia di Brera where he studied painting and drawing with Giuseppe Puricelli and Pio Sanquirico. He made his public debut in 1885 at the annual Brera exhibition with a genre painting The Ambitious Little One (La piccola ambiziosa). In 1887 he spent about one year in Rome where he attended the Accademia di San Luca and the following year he went to the Accademia di Belle Arti in Florence where he took lessons with Fattori and became friendly with Plinio Nomellini and Micheli. He completed his apprenticeship at the Accademia Carrara in Bergamo, where he perfected his technique in human figures thanks to the teachings of Cesare Tallone. In spite of a trip to Paris in 1889 to view the Universal Exposition, Pellizza remained anchored spontaneity and truth in the rendering of form along with a vein of poetry and humanity, the reasons for which his preferred artists of the time were Jules Bastien-Lepage and Millet for country realism. Pellizza’s early works, done mainly at Volpedo where he lived, were painted from life and outdoors, similar to Nomellini and yet also to the early Divisionist works by Segantini, Morbelli and Previati, like his Mommies (Mammine) of 1892. When he “settled” with the Divisionist technique, Pellizza would use it consistently not only in terms of method for its intensity and luminous vibration, but also to augment the effectiveness of the artwork and its social significance. This is confirmed by the two, nearly contemporaneous, paintings In the Hayloft (Sul fienile) (1893) and Disappointment (Speranze deluse) (1894) that marked the transition to this new style. His Florentine sojourn during the winter of 1893-1894 put him into close contact with classical and idealistic culture born from the close relationship between art and literature. It also allowed him to meet figures such as Domenico Tumiati (a young poet enamored of fourteenth and fifteenth century painters) who helped Pellizza direct his studies towards an ideal of art as harmony. This concept would lead to works such as Procession (1892-1894), Self Portrait (1898-1899) and Mirror of Life (Specchio della Vita) (1895-1898) where the harmony of the shapes and nature are studied in relation to a social and universal organicity. The series of the “Idylls” reveals symbolic suggestions similar to the works of Previati. However, his interest in social themes never diminished, rather it was encouraged by his correspondence with Morbelli. Thus, starting with the life sketches he did in the piazza of Volpedo in 1892, the Ambassadors of Hunger (Ambasciatori della Fame), and Fiumana (1896-1897) that remained unfinished, Pellizza was ready, in 1898, to begin a large social painting The Fourth Estate (Il Quarto Stato). This was his living testimony of his acceptance of the socialist ideal and his conviction that art could, indeed, play a role in the cultural and social development of the masses. His most famous painting, completed in 1901 will remain the symbol of the working class struggle. The expressive power of his classic, monumental shapes conveys the idea of a true “glorification” of a social class. Divisionism, applied to natural and human shapes would take the artist towards a scientific and philosophical analysis of the effects of art which, at the start of the new century, would develop into symbolic, elegiac works. The Rising Sun (1904) and Weary Limbs (Membra stanche) (1903-1907) came from universal considerations on life, death, and the value of mankind in Nature’s design. In 1907, his wife died in childbirth, and so did his newborn son. On 14 June Giuseppe Pellizza hanged himself in his studio in Volpedo.

The landscape has a direct influence on feelings that dissipate, on unformed ideas. That inexplicable mixture that absorbs us in the evening is an effect of nature around us, of the day of death. 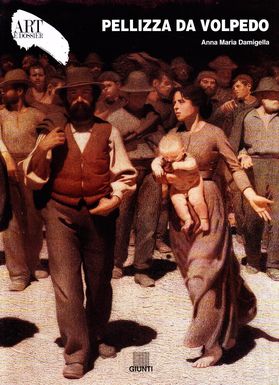