Giuseppe Arcimboldi was born in Milan, the son of Biagio, a painter, and of Chiara Parisi. He trained with his father, and both of them are recorded in the annals of the Milan Cathedral workshop from 1549. By 1558, Giuseppe had executed the designs for a number of stained-glass windows for the Cathedral, and in the same year he designed the cartoon of a tapestry depicting the Transit of the Virgin for Como Cathedral. In the same period he also painted the Tree of Jesse fresco in Monza Cathedral. In 1562 he was called to the imperial court of Ferdinand I in Prague to work as a portraitist. The first series of Seasons, that includes Summer and Winter (Vienna, Kunsthistorisches Museum), dates from the following year, 1563. Arcimboldi retained his post as a portraitist under Ferdinand’s successors, Maximilian II and Rudolf II. In 1566 he executed the Elements series – Water and Fire are housed in Vienna – and in the same year he made a brief trip to Italy. Arcimboldi also worked for Maximilian II as scenery and costume designer, musician, poet and inventor of ephemeral devices and in 1570 he took an active part in the festivities to celebrate the marriage of the Emperor’s daughter, Elisabeth, to Charles IX of France. In 1577 he painted a new series of the Seasons for Rudolf II, who also sent him to Bavaria to gather items for his collection of antiques and curiosities. Although he remained on excellent terms with the Emperor, Arcimboldi returned to Milan in 1587 at the age of sixty. In 1591 he sent Rudolf II a beautiful portrait in the guise of Vertumnus, which the Emperor liked so much he bestowed the the title of Count Palatine on him in 1592, just a year before his death in Milan on 11 July 1593.

Despite possessing a talent and seriousness (allow this to be said!) far greater than certain moderns, Arcimboldi was never in his own age, even at the height of his popularity, considered as anything other than an elegant and exquisite artificer. Not only was he not regarded as being in the same firmament (in art, as in sanctity, there is even a scale of perfection) as Raphael and Titian, but not even that of Perugino or Francia. Fine art, but a little cold, decorative in the Flemish style of the time (think of the still lifes of Baschenis or certain Dutch artists). A little mad and perverse. […] Arcimboldi worked according to a spirit that foresaw Arcadia, a figure of Agriculture with ploughs, hoes and yellow sheaves in the same manner in which certain modern painters might compose the figure of modern man, with cordless telegraphic equipment, aeroplanes, propellers and engines. To some extent this has been tried: think of the so-called metaphysical painters and of some of the Futurists. 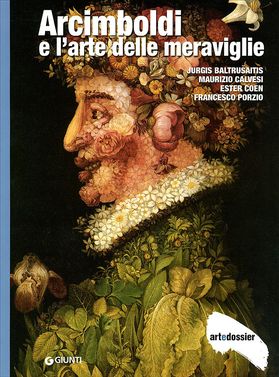