The name of Gustav Klimt is indissolubly linked to the Viennese Secession, of which he was one of the undisputed leaders. His father’s trade – goldsmith and engraver – certainly had an impact on the young Gustav’s decision to attend the school of applied arts of the Museum of Art and Industry where he learned several techniques and a vast repertory of decorative motifs from various eras and cultures. Klimt decided to specialize in painting and developed his own language that was initially in harmony with the historicist-academic style in which he had been trained. He received many commissions early in his career, but his true “debut” was the decoration of the Burgtheather; this was followed by the commission to decorate the entrance staircase of the Kunsthistorisches Museum of Vienna (1896). In the allegorical murals of rudPhilosophy, Medicine and Jurisprudence that he painted for the University his sprit and language were already decidedly symbolistic. By 1898 Klimt was already an authoritative figure in the Secessionist movement, and his painting was strongly defined in that ambient. At the second Secessionist exhibition he presented his Pallas Athena, a living warrior who, instead of Nike, holds a miniature figurine of Nuda Veritas, an emblem of the movement’s ideal that had already appeared in “Ver Sacrum” its official journal. In 1903 Klimt made two trips to Ravenna: he was enchanted by the gold mosaics, and this marked his “golden period” that coincided with his full creative maturity that began with Judith of 1901 and culminated with Judith II of 1909. He used the gold to modulate between the flat and plastic parts of the paintings. The slightly demoniac sensuality of the Klimt “femme fatale” was associated with its preciousness and traditionally symbolic role as codified in Judith I. The restless dual nature of femininity that developed in the Beethoven Frieze (1902) is present in Hope (1903), in the Three Ages of Woman (1905) and in the enchanted sirens who float in the water of Silver Fish (1899) and Goldfish (1901-02) and in the two versions of Water Serpents (1904-1907). The murals in the Stoclet House, a work of total art, celebrates the fusion of male and female, of the spirit with matter, of the conscious and unconscious through the symbolic motifs of the tree of life and the embrace. The theme of amorous fusion returned again in The Kiss (1908) to culminate in the golden period that closed with an artistic and psychological crisis that was to last several years. The Secessionist spirit had entered a decline and Klimt’s work was the aggregating element of Viennese artistic life was interrupted. He went through a period of searching. The gold disappeared and the dark tones prevailed until 1912 when Klimt embarked on a new phase of the “flowery style.” In the portraits from this period the expressive intensity of the faces is accentuated while the color is spread freely over the surfaces dissolving the rigid Byzantine framework of the golden period. The symbolic ornament remained, but the mosaic of earlier days was transported into a colorful carpet with strong Japanese influence. Klimt continued studying and searching until 1918 when a stroke ended his life.

That the image of the world is temporary is certain for the Austrian in all his feelings: and since the baroque period no has set this amazing depth of thought before our eyes with as much splendor and elegance as Klimt. [...] Klimt paints a woman as if she were a jewel; she sparkles, but the ring on her finger seems to breathe and her hat is even more alive than she, her mouth blossoms but you do not think that she can speak; and her dress seems to whisper. Or if he paints a sunflower, it seems to wink with the gentle eyes of a mature man. But then, he paints a tree that resembles hammered gold and when we shiver before the apocalyptic faces of his large paintings, it may be that he only wanted to play with colors. 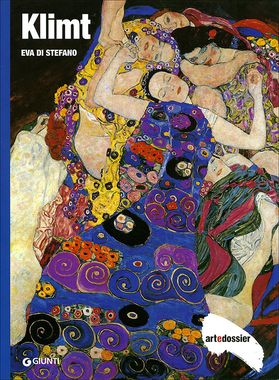