Jacopo Carucci was born in Pontorme di Empoli in 1494.Orphaned at a young age he moved to Florence in 1508. His masters were Mariotto Albertinelli, Piero di Cosimo and Andrea del Sarto in whose atelier he arrived in 1512 and where he worked with Rosso Fiorentino. From the following year he worked on Santissima Annunziata and in the cloister he frescoed the Visitation (1514-1515). In 1515 he painted St. Veronica in the pope’s chapel in Santa Maria Novella where we can see the clear influence of Michelangelo. During the same year, with other artists he painted the fourteen panels with Scenes from the Life of Joseph (London, National Gallery)for the nuptial chamber of Pierfrancesco Borgherini and Margherita Acciaioli. On the basis of his knowledge of Northern prints he created compositions teeming with life and descriptive details. In 1518 he was working on the altarpiece for the Pucci chapel in the church of San Michele Visdomini in Florence. This work is a sort of manifesto of his “anti-classical” inclinations: the pyramidal composition, derived from Andrea del Sarto, is animated by the expressions of the characters (recalling Leonardo’s studies and northern engravings), the mobility of the light and the diagonal arrangement of the figures. He became famous and was summoned to work for the Medici family: between 1519 an 1521 he painted the lunette with Vertumnus and Pomona in the villa at Poggio a Caiano, a clear and serene moment of country life alluding to the Medici restoration and the pontificate of Leo X. Between 1523 and 1525 he painted frescoes with the Scenes from the Passion of Christ for the Certosa of Galluzzo just outside Florence, while a plague epidemic ravaged the city. This was followed by important altarpieces with the Deposition for the Capponi chapel in Santa Felicita and the Visitation for the Pieve di Carmignano. The michelangelesque sculptural shapes, the gestures and gazes, the clear chromatic range and the intense sentimentalism are hallmarks of mannerist painting that had been fully released of all reference to the real. The favor of the Medici, for whom he did many portraits (including Cosimo the Elder in the Uffizi), lasted through the following years with many paintings– all of which have been lost – on the villas at Careggi (1535-1536) and Castello (1537-1543) and the choir of the church of San Lorenzo (1546-1557) that he worked on until his death on 31 December 1556 or 1 January 1557.

Pontormo having thus been given the occasion...to set his hand to putting his house in order, made a start on the building work, but did nothing of much importance. Indeed, though some affirm that Pontormo was of a mind to spend very heavily according to his position and make a commodious dwelling-place, of good design, it is none the less evident that what he did, whether he did not have the wherewithal to spend, or for some other reason, has the aspect of a building put up by an eccentric recluse rather than of a well-appointed residence, seeing that to the room where he used to sleep and sometime works, he had to climb by a wooden ladder, which he pulled up by means of a pulley after he was indoors so that no one could clamber up to him without his consent or knowledge. But what most upset people about him was that he would not except when and for whom it pleased him, and at his own him; hence, when he was many times sought after by noblemen who wished to have some of his work...[...] he would not serve them; and then he would be prepared to do all and everything for some low common man and for a ridiculously low price. [...] Jacopo was a very well-bred and frugal man, and in his dress and way of life more miserly than moderate, and he always lived all by himself, never wanting anyone to serve him or cook for him [...] Pontormo had some very odd traits, and was so fearful of death that he would not even hear it mentioned, and he fled from having to encounter dead bodies. He never went to festivals or to any places where people get together, to avoid being caught in a crowed; and he was solitary beyond all belief. Sometimes when he was at work, he began to think so deeply about what he wanted to do, that he would leave without having done the else all day except stand in deep thought. 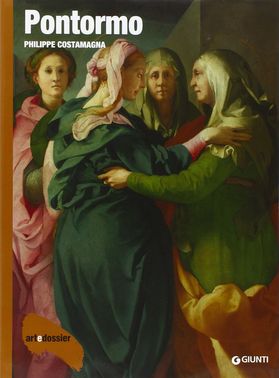