Bosch was born in 1453, probably on 2 October, at ‘s-Hertogenbosch, a town in the Brabant. His father was the painter Jeroen Anthoniszoon van Aken. He probably adopted the pseudonym of Hieronymous Bosch to distinguish himself from many family members who bore his same name. The earliest information about the artist dates from 1474 when he was engaged in a business transaction of behalf of his sister. In fact, most of the information about his life concerns financial transactions recorded in the city’s land registry. His father, who died in 1478, left the management of his atelier to Bosch’s brother Goosen. That same year the artist married Aleyt an aristocrat whose wealth protected him from economic problems throughout his life. Thanks to his newly acquired status he began a slow climb through the ranks of the city’s bourgeois society. Clever management of his wife’s assets often allowed him to accept mere reimbursements for his expenses during his artistic career. In 1486 he joined the confraternity of Our Lady, to which his wife belonged, it was a congregation dedicated to charitable works and staging religious pageants. Two years later he was named a “notable” of the confraternity, and this recognition confirmed his social rise. Between 1489 and 1492 he worked on the altarpiece for the confraternity’s chapel in the cathedral. During that same period he probably painted the Vienna Christ Carrying the Cross, Death and the Miser, and The Ship of Fools. In the following years he continued working on the confraternity chapel and prepared the designs for the stained glass windows that were made by the master-glassmaker, Willelm Lambert. There is no information about the artist in his native town for three years following 1499. This gap plus the fact that there are some of his paintings in Venice lead to the hypothesis that Bosch spent some time there early in the sixteenth century. In 1504 Philip the Fair, who had met Bosch in 1496 commissioned a panel of the Last Judgment which may be the Last Judgment Triptych in Vienna or the fragment of the Last Judgment in Munich. His work became increasingly intensive: between 1505 and 1510 he did the drawings for the decorations and built models for the embellishment of the confraternity chapel and completed some of his most famous paintings: The Hermits Triptych in Venice, the Temptation of St. Anthony Triptych in Lisbon, the Procession to Calvary and the Temptations of Saint Anthony, both of which are in the Prado. In 1515 he was probably working on the Ghent Christ Carrying the Cross, one of his last documented works. The exact date of his death is not known, but from the confraternity records we know that his funeral was held on 9 August 1516 in the chapel of the Confraternity of Our Lady in the cathedral.

Bosch’s landscape is broad, as if it were viewed from the top of a tower while the figures have a much lower focal point: they are perfectly plumb and are not at all foreshortened. It is because of this archaic duality of perspective that a true spatial illusion cannot be developed and Bosch’s paintings create a sensation of a decorated surface even though the landscape setting is often rendered with meticulous care in both the drawing and color. What is missing is the entire intermediate plane that confers structural strength upon the space […] Everything that is abnormal and deformed strikes and attracts Bosch’s imagination: he seems to have an aversion for harmony and symmetrically architected schemes, and yet he is almost satanically fascinated by all formal freedom. […] Because of the acumen of his studies of the human material Bosch undoubtedly anticipates Bruegel, however, in Bosch the sense of reality is often deviated from a cruel imagination that violates and deforms nature. 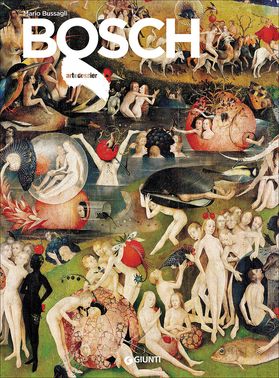