Domenikos Theokopoulos, known by the hybrid Spanish-Italian name of El Greco was born on the Greek island of Crete in 1541 when it was under Venetian domination. His father, Jorghi was a tax collector and his older brother, Manoussos, an influential member of the island’s civic community worked as a customs official at the port. There were several schools of painting on the island, most were run by Orthodox masters and Domenikos showed an interest in the visual arts quite early in life. He began to learn about Italian painting through the engravings and activities of the Candia painters such as Jorghi Klontzas and Michail Damaskinos who had been to Venice and had introduced the republic’s artistic innovations to the tradition of icons. Perhaps El Greco worked in Klontzas’ atelier since it is certain that he was trained on Crete where he lived until 1567. His early paintings must have remained close to the traditional Byzantine style as we can see from some works such as Dormitio Virginis (church of Dormitio Virginis at Ermoupolis) which, in spite of some western touches is not distant from XV century Cretan style. In 1567 Domenikos moved to Venice where he frequented Titian’s studio and updated his own pictorial language to achieve an original combination of Greek and Venetian elements. The Modena Triptych (Modena, Galleria Estense) dates from the early years in Venice. He painted mainly religious scenes, but also had to work on portraits, a genre that was foreign to his early Byzantine-style training. In the summer of 1580 he moved to Rome for reasons which, even today, are still unclear. He was a guest of Alessandro Farnese until he left for Spain in 1576. In 1572 he was registered in the Academy of St. Luke as a miniaturist and that same year he began his own professional activity with the help of a pupil and assistant, Lattanzio Bonastri of Siena. He began his Spanish life in Madrid where he stayed for a year before moving definitively to Toledo. During those years he seemed to move closer to his eastern and Byzantine roots and a counter-reformist spiritual and religious position which, in his paintings, is manifested in the gradual dematerialization of form and an accentuation of the visionary aspects of the composition.

It is an astonishing and splendid painting, black and grey, lightened by green reflections. In the black robes there are but two grey splotches: the collars and cuffs from which bony heads and pale hands protrude. Soldiers or priests: the final effort of the Catholic tragedy. They are already dressed in mourning. They no longer look towards heaven. Their grey faces are dry as stone. The bones that pierce the dry skin, the eyeballs sunken into their orbits seem to have grasped by metal pincers […] The mouths are like wounds. The hair has thinned from fasting, from asceticism, from the slow asphyxia that spreads in closed chambers. It seems as if the desert wind had passed through. 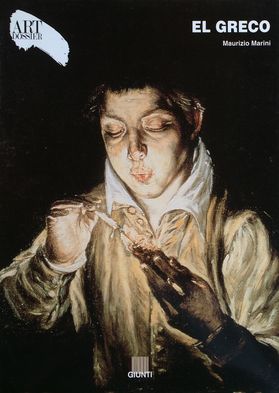