Johan Heinrich Füssli was born on 6 February 1741, son of a civil servant and amateur painter and collector, Johann Caspar and Elisabeth Waser. The young Heinrich was raised in a cultural environment that allowed him to meet some outstanding figures such as the Protestant theologian Johann Caspar Lavater, the educator Johann Heinrich Pestalozzi and the scholar Johann Jacob Bodmer who introduced him to the writers who would become an inexhaustible source of ideas for his art Homer, Dante, Shakespeare and Milton. According to his father’s wishes he completed his divinity studies and in 1761 was ordained a Zwinglian minister. In 1763 he traveled through Europe, first to Berlin and then London where he was welcomed in the capital’s literary circles. There he met Joshua Reynolds who encouraged him to paint. During the same period he devoted himself to translating Winckelmann’s works that did not, alas, meet with any success (1765). During his stay in Paris as tutor to the young Lord Chewton he met David Hume and Jean-Jacques Rousseau and became such an ardent supporter of the latter that he published an anonymous essay on his theories that was published in 1767. In 1770 he departed for Italy. He spent a short time in Genoa and in Florence before reaching Rome where he continued his studies of classical antiquity and was enthralled by the art of Michelangelo as we can see from the many drawings he did during those years. Upon his return to Zurich in 1778 he painted The Oath of the Rütli. Some bitter disappointments in love prompted him to leave for London where, the following year, he met William Blake with whom he became friendly. His first success artistic success came in 1781 when he painted The Nightmare, a subject that he repeated several times. During these years Füssli alternated between art and literature: he illustrated the French edition of Lavater’s Physiogmische Fragmente (1781), painted some canvases with Shakespearian subjects for a series of engravings (1786) In 1788, translated a book by Lavater and he married Sophia Rawlins of Bath-Easton that same year. Between 1790 and 1799 he worked industriously on a series of paintings for the Milton Gallery that were later shown in an exhibition at Christie’s. He was elected to the Royal Academy in 1790 to become a professor in 1799 and then “keeper” in 1805. In 1816 Canova had him elected to the Accademia di San Luca in Rome. He continued his literary works and wrote the lectures he gave at the Royal Academy between 1801 and 1823, and the Aphorisms that he completed in 1818. The artist died on 16 April 1825 at Putney Hill, the country home of the countess of Guilford.
The works

Füssli had a broad knowledge of English literature and poetry: few people could better recall the verses of Chaucer, Spenser, Shakespeare, Milton and Dryden or could better understand their meanings. He had a profound knowledge of Shakespeare and Milton whom he began studying in his youth, reading Bodmer’s German translations of Shakespeare’s plays. Bodmer, his tutor, was more than well-acquainted with English poetry and he later translated Paradise Lost into German. Notwithstanding his predilection for the ancients, and Homer in particular, Füssli considered the first three acts of Hamlet and the second book of Paradise Lost as the greatest achievements of the human imagination […]. Lord Byron was his favorite among the modern poets, and he eagerly read his works as soon as they were published. When he was encouraged to read the works of poets admired solely for the beauty of their language and skill in writing verse he exclaimed: “I do not have the time because I still do not know all the words of Shakespeare and Milton.” He was also well versed in the works of foreign poets: his favorite was Dante since his images left the deepest impression on the mind and offered many ideas for his bold brush.

J. Knowles, The Life and Writings of Henry Fuseli, 1831 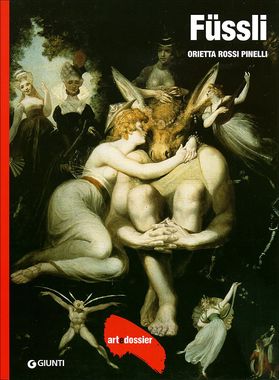