A native of Siena, or according to other sources, of San Gimignano, Simone Martini was trained in the workshop of Duccio di Buoninsegna and made his debut, as it were, in 1313 with an important commission from the government of Siena: the Maestà for the Map Room in the Palazzo Pubblico. This exquisitely courtly painting was done with a refined technique and large scale use of precious materials and punch-work. In 1314 he began the fresco cycle of Scenes from the Life of St. Martin, in the chapel dedicated to Martin in the lower basilica of St. Francis in Assisi. In 1317 Robert d’Anjou summoned him to Naples, made him a knight and commissioned a commemorative painting that is now in the Museum at Capodimonte. In 1320 the already famous artist, with an atelier of his own, was asked to paint a polyptych for the church of Santa Caterina in Pisa and another – that has since been dismantled – for the church of San Domenico in Orvieto. When he returned to Siena he probably painted the fresco with Guidoriccio da Fogliano a heraldic rendering of a fairytale knight in an awesome, bleak landscape. In the altarpiece with the Blessed Agostino Novello Simone returned to the colorful and simple form of devotional painting. In 1333 with the help of his brother-in-law, Lippo Memmi, he painted the Annunciation and the Two Saints, a triptych that is in the Uffizi Gallery. Sometime around 1340 he moved to Avignon, to the court of Pope Benedict XII where he painted frescoes, that have been almost entirely lost, for the church of Notre-Dame des Doms and the Polyptych of the Passion that is characterized by a highly dramatic language. The Holy Family (Christ Returning to His Parents After Disputing with the Doctors) , that is now in Liverpool, dates from the final years of his life. This painting is a highly realistic rendering of an unusual subject: Joseph scolding his son after the dispute in the Temple.

There is a solemnity in all his figures that is quite different from Giotto’s. After he left the school of Duccio di Boninsegna he did not hold onto any of his teacher’s conventions except for the priestly grandeur and decorum. He lavished all the splendors of earthly life on the saints; Giotto found moral greatness in the character and dignity of will and in the power of the gesture. The former drew on nobility and regality for his models; the latter on the sincerity of the common folk. Simone Martini, mindful of Byzantine riches portrayed by Duccio, painted figures that shined as if they were enameled, and endowed their garments, that seemed to woven of filigree, with all the skill of the Sienese goldsmiths, and every homage of a worshiper. Giotto gave them a soul, that is why he is wrapped in the light of Dante and the other in the gentle glow of Petrarch. 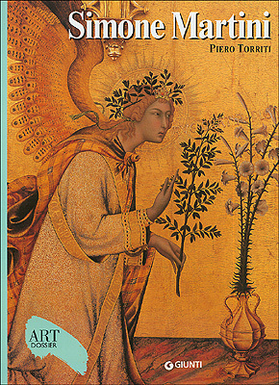