Between 1441 and 1445 Andrea Mantegna was listed in the register of Paduan painters as the “godson” of Francesco Squarcione. The fertile humanistic environment in Padua, that had been vitalized by the many Tuscan masters, Filippo Lippi, Paolo Uccello, Andrea del Castagno and Donatello, who had passed through the city, was fundamental to his development. In 1448, together with Niccolò Pizolo, he received the commission from the Ovetari family to fresco the family chapel dedicated to Saints Christopher and James in the church of the Eremitani in Padua. His partner’s sudden death found him working by himself to complete the vast project that took until 1457. Although the frescoes were almost entirely destroyed in World War II, the fragments that remain are sufficient to reveal the vigorous and incisive manner in which he portrayed heroic figures whose gestures are set within a clear perspective setting of Tuscan origin. In 1449 Andrea was in Ferrara, working for Lionello d’Este. In 1453 he married Nicolosia, Giovanni Bellini’s sister. Between 1457 and 1460 he painted the triptych altarpiece for the church of San Zeno in Verona. In the painting he unified the space in order to render the assembly of saints gathered around the Virgin and Child beneath a classic frieze of putti and a ridge of fruit garlands more realistic. In 1460 he accepted the invitation of the marchese Ludovico Gonzaga and moved to Mantua. He made but a few trips in his life: in 1467 to Florence, the following year to Pisa and then from 1488 to 1490 he was in Rome decorating the chapel of pope Innocent VIII in the Vatican [these paintings have been lost]. At the Gonzaga court he worked on various projects: from religious paintings to portraits, from huge decorations to engravings. His work on the decorations of the marquis’ chapel in the castle is documented as having been done in 1464. The chapel decorations have been destroyed, but the Death of the Virgin and the Uffizi Triptych (1464-70) are related to them. Between 1465 and 1474 he decorated the Camera degli Sposi in the ducal palace. He alternated between the roles of skillful decorator and painter of deeply religious works such as The Dead Christ (1480 circa) that is now in the Pinacoteca di Brera in Milan. The year 1486 found him working on nine canvases with The Triumphs of Julius Caesar that were inspired by classical literature and archeology. The altarpiece with the Madonna della Vittoria that he painted for Francesco II Gonzaga in 1496 is now in Paris. Then starting in 1497 he painted Parnassus, 1497 circa; Triumph of the Virtues, 1502 for the study of Isabella d’Este. His last documented painting is The Myth of the God Comus, it was still unfinished at the time of his death, so it was completed by Lorenzo Costa.

…Andrea still held to the opinion that the statues of antiquity were more perfect and composed of more beautiful elements that anything in living nature […] Andrea’s fondness for this theory can be seen in his works, whose style is in fact quite sharp and sometimes suggests stone rather than living flesh […] Andrea discovered a vastly improved way of painting figures in perspective from below upwards, and this was a very difficult and ingenious invention.

G. Vasari, Life of Andrea Mantegna, Painter of Mantua, in Lives of the Artists, Volume I, Penguin Books, Translated by George Bull, 1965. 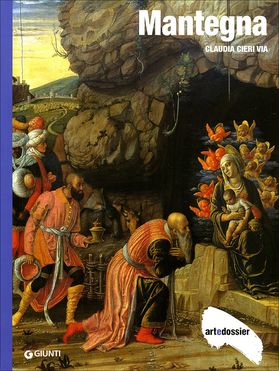