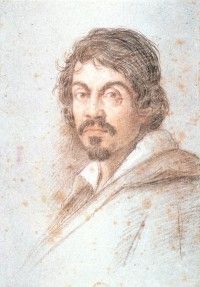 Michelangelo Merisi was called Caravaggio after his birthplace in the province of Bergamo where he spent his childhood. Between 1584 and 1588 he was an apprentice in the Milan workshop of the painter Simone Peterzano who also came from Bergamo. From the sixteenth century Lombard painters he acquired his bent for naturalism and attention to detail. He was a restless spirit, and in 1590 spent a year in prison for a crime he never confessed. In 1592 he moved to Rome and for a few months in 1593 worked in the atelier of Cavalier d’Arpino where he painted still-lifes of fruits and flowers. In 1595 he came under the protection of cardinal Francesco Maria Del Monte who was his first important patron. The paintings Bari, Rest on the Flight into Egypt (Rome, Galleria Doria Pamphilj), The Young Bacchus and The Magdalene all date from this period. Thanks to his protector he came into contact with Rome’s major families and on 23 July 1599 he received his first public commission The Calling of St. Matthew and The Martyrdom of St. Matthew for the Contarelli chapel in the church of San Luigi dei Francesi. The following year he began The Conversion of St. Paul and The Crucifixion of St. Peter for the Cerasi chapel in Santa Maria del Popolo, and then, in 1602 he completed the cycle in the Contarelli chapel with the second version of St. Mathew and the Angel. His works were increasingly characterized by strong contrasts and intense dramatic tension. In the early years of the seventeenth century, while still in Rome, he painted The Sacrifice of Isaac and the Madonna with Pilgrims. In Genoa where he fled in 1605 to escape justice after wounding the notary Marinao Pasqualone, he painted the Ecce Homo. On 26 May 1606 he killed Ranuccio Tomassoni in a brawl and was sentenced to death. He first sought asylum on the estates of his Roman friends and patrons, and then fled to Naples where he left two masterpieces The Seven Works of Mercy and the Madonna of the Rosary. The following year he moved to Malta where he painted the enormous The Beheading of St. John the Baptist, the only work he ever signed. He was discovered and fled again, to Messina, Palermo and Naples. One year before his tragic death he painted The Resurrection of Lazarus and The Adoration of the Shepherds. In 1610 after he received a papal pardon he decided to return to Rome by sea, but he died of a fever on the beach when he arrived at Porto Ercole.

This Michelangelo achieved fame, honor and renown with his work [...]. He says that all things are nothing more than bagatelles, childish or nonsense if they are not painted from life – no matter who painted them – and there is nothing better than following nature [...] Now he is a mixture of wheat and chaff; he does not dedicate himself to his studies, after he has worked for a couple of weeks he disappears for a month or two, with his sword at his side, a servant in his wake him and roams from one wager to the next, always ready for a duel or a brawl, so that it is rare that one can associate with him.